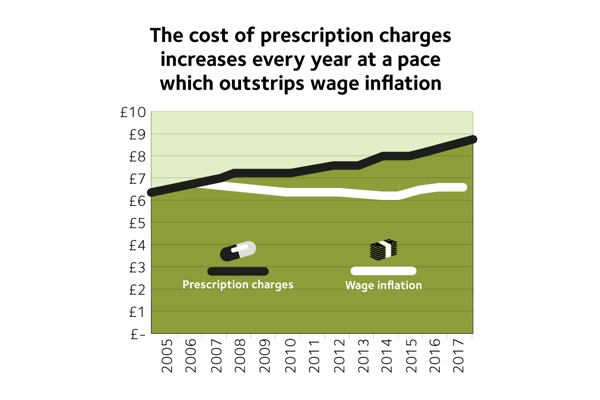 Prescription charges for people with PSC

People with PSC suffer from a rare, long-term, incurable liver condition. Furthermore, over 70% of people with PSC also suffer from Inflammatory Bowel Disease (IBD) and/or another immune-mediated disease. Like others with long-term conditions, PSCers must pay for their prescriptions, often needing multiple medications at once. Prescription charges impose costs on people with chronic conditions for the medicine that keeps them well or even alive, not to mention the additional costs if their illnesses flare-up. There should be a fair and consistent system for prescription charges.

PSC patients should have fair access to medications to help with the debilitating symptoms of our rare and incurable condition.  We support the need for free access to prescriptions for patients with a long-term health condition throughout the UK and will work with the Prescription Charges Coalition to bring about a fair and consistent system.

In May 2009, the then Government commissioned an independent review of prescription charges by Professor Sir Ian Gilmore, former President of the Royal College of Physicians. He recommended that all those with long-term conditions should be exempt from prescription charges and outlined how this policy could be introduced. However, later that year it was announced that this would not go ahead.

In October 2010, the incoming Coalition Government confirmed that it would not introduce free prescriptions for people with long-term conditions at this stage, but will ‘explore options for creating a fairer system of prescription charges and exemptions’.

Over the last decade, research by the Prescription Charges Coalition, Citizens Advice, Asthma UK, Rethink Mental Illness and Parkinson's UK, amongst others, has demonstrated time and time again the impact of prescription charges on people with long-term conditions.

The Prescription Charges Coalition's report ‘Paying the Price: Prescription Charges and Employment', released in February 2014, examines the impact of prescription charges on the working lives of people with long-term conditions in England. Surveying over 5,000 people, the Prescription Charges Coalition found that for nearly 4 in 10 respondents, the cost of medication was prohibiting them from taking their medication as prescribed. Of these, three quarters reported that this had impacted on their ability to work in some way. Prescription charges are a major barrier to people taking their medicines effectively, leading them to severely compromise their health. This results in poorer quality of life, worse health outcomes, additional treatment, unplanned hospital admissions, decreased productivity and increased reliance on benefits. Prescription charges are detrimental to the working lives of people with long-term conditions at all income levels and of all ages. While those on the lowest incomes are most affected, the survey shows that there is also an impact for those on higher household incomes.  Younger people are also more likely not to take their medication due to the cost.

Recommendations from ‘Paying the Price: Prescription Charges and Employment'

Making the System Fairer - What People with PSC Say

“I would have had to let some of my conditions go untreated if I had had to pay each prescription...”

“I have to take immunosuppressants for the rest of my life to stop my body rejecting the transplanted liver, so no, I don't think its fair. This should be classed under the other illnesses where patients have to take lifelong medication.”

“I have several immune diseases none of which are considered for free meds. Although currently I am able to work 'normally', I am still on nine different prescription meds which is huge spend without my pre-payment card.”

“No I don't think it's fair! I definitely agree that we are very lucky to have the NHS and with the amount of procedures and tests we undergo we definitely get our tax money’s worth but I don't really understand how the prescription charges work. Some patients get free prescriptions because of their condition (thyroid problems etc) yet others have to pay when their medication is just as essential. I don't understand the reasons behind this and definitely think it needs reviewing.”

“Like everything, there needs to be rules to make it fair for all.”

“I agree it's ridiculous we are have to pay for medication that's potentially keeping us alive I think it's fair we pay in some respect but not as much as they are charging; I paid £15.70 for two prescriptions and they only lasted 3 weeks.”

“I pay for mine monthly and it is a lot cheaper but if I was unable to pay for it and not take the meds I would cost the NHS more.”

“There should be clearer guidelines on who should get free prescriptions and a review on what health conditions should be eligible.”

Help us to campaign for a fairer system

If you agree that people in England with long term conditions shouldn't have to pay for their prescriptions, please tell your MP, and ask them to help us address this issue.

Let PSC Support know if you get a response.

You can also share this action on social media and ask your friends and family to show their support. If you tweet, don't forget to tag @PrescriptionCC and @PSCSupportUK

Electronic Prescriptions to be Introduced Nationally from November 2019

NHS to scrap paper prescriptions next month under a plan to save £300m by 2021.

PSC Support is a member of the Patient Group Consultative Forum (PGCF) to bring the PSC patient voice to the work of the MHRA.

How to report side effects of medicines and how to create a ‘watch list’ of medications for which you can receive news and alerts.

This week, Maxine, PSC Support’s Programme Development Officer, has been extending her knowledge in this area with EURORDIS, the European patient organisation for rare diseases.

Your Medicines Supply After the EU Exit

What to expect in the event of a no-deal EU Exit and and what to do now.

Research of medicine for PSC

10 things you need to know first about PSC

Understand your medical care and what to expect