Research: ALP and the ELF score in PSC Clinical Trials

On 21 July, research about alkaline phosphatase and the enhanced liver fibrosis score and PSC was published. We've explained the results below.

What is a biomarker? Expand

A biomarker is something that can be measured in a blood test or a scan, which help predict which direction a person's disease is likely to take; or whether they are likely to develop problems many years down the line related to their PSC.

ALP is associated with bile duct damage. The level of someone’s ALP is often used to:

However, less than 25% of PSC patients are confident that ALP is a good predictor of progression. Patients with relatively low (but still abnormal) ALP report feeling dreadful, whereas some who feel great have very high ALP readings! ALP levels in the normal range, however, are associated with better outcomes for patients.

What is an ELF test? Expand

ELF stands for ‘Enhanced Liver Fibrosis’. The ELF test is a blood test that measures three parameters involved in the process of developing fibrosis (scare tissue in the liver). A score is then calculated to estimate the severity of fibrosis in your liver, and can be used to make an estimate about what might happen to you.

What is the upper limit of normal (ULN)? Expand

Every blood test has a range that is expected in the average healthy person. This is called the normal range, or reference range. The ULN is the highest test result you can get in that ‘normal’ range. Because people with PSC have damage to their bile ducts, their ALP results are often above the normal range, or higher than the ULN.

What is a liver biopsy? Expand

A liver biopsy is an invasive procedure that takes very small samples of liver tissue for investigation (about 1/50,000th of your liver). It is used to look at damage to the liver and so can be used to determine disease progression. For this reason, it is a useful test in clinical trials. Liver biopsies were used in this trial to measure fibrosis and cirrhosis change.

One of the challenges in proving whether a new drug works is the fact that things like liver transplantation, development of cancer, or attacks of cholangitis are difficult to predict from the moment someone is diagnosed with PSC.

This means that doctors are constantly looking for early signals that a new medicine is working, most often in the blood tests that are performed during routine hospital visits. One of the most commonly tested ‘biomarkers’ is alkaline phosphatase, or ALP. Some studies have suggested that groups of individuals who have lower ALP values in blood are less likely to need a transplant later in life, whereas other works show that people still experience progression in liver disease despite lowering ALP (for instance, whilst taking medicines like ursodeoxycholic acid).

One of the reasons for the different findings between studies could be due to the fact that ALP readings vary between hospital visits. Up till now the amount of variation between blood test readings have not been analysed among patients with PSC.

In this study, a series of investigators from around the world looked at data from 234 patients with PSC as part of a clinical trial. They evaluated the performance of a number of biomarkers, with a particular focus on alkaline phosphatase (ALP). The authors found that ALP values vary considerably from visit to visit over a 2-year time period. Importantly, the large degree of variation meant that ALP values did not consistently associate with worsening of PSC liver disease (developing cirrhosis, liver scar tissue formation/fibrosis, or a number of adverse events such as cholangitis attacks, jaundice, cancer or loss of liver function). However, the authors did show that variation of another biomarker, the enhanced liver fibrosis score (ELF score) was relatively small, and that levels consistently predicted worsening of liver disease over a two-year period, no matter when it was measured.

Where did the data for the study come from? Expand

When patients go on clinical trials, vast amounts of data are collected, from regular blood tests and scans to biopsies and questionnaires. A pharmaceutical company conducted a 2-year trial in PSC testing a drug called simtuzumab, and whether it can slow the rate at which liver disease is progressing. Whilst the drug did not achieve its primary goal, the data collected during the study has been invaluable for better understanding how PSC progresses, and assist in development of new biomarkers.

What did the researchers do? Expand

The research team analysed data from all 234 patients who took part in the trial. They had blood tests checked every 4 weeks, and liver biopsies from the time the trial started, and at 48 and 96 weeks later (when the trial ended). It is important to note, that liver biopsies are not needed routinely if you have PSC, but are quite commonly obtained when testing whether a new drug is working.

The researchers were particularly interested in ALP and the ELF score, how levels can change over time, and how levels associate with the development of liver fibrosis (scarring) and cirrhosis.

What did the team find out? Expand

Some participants started the trial with an ALP level of more than 2-times the upper limit of normal (ULN). 11% of these saw an ALP reduction of more than 40% after a year, and 16% after two years, regardless of whether they were on the study drug or not. In patients who started out with ALP at 3 times the ULN, 13% saw a 40% drop after one year and 18% after two years.

Other participants started the trial with ALP within the normal range but a quarter of those saw their ALP become abnormal over time.

Variation in ALP levels was not different between people who experienced acute cholangitis during the trial (compared to those that did not), neither was it different for people without inflammatory bowel disease (IBD), those taking ursodeoxycholic acid, or between individuals having mild, moderate or severe PSC.

This suggests that a high ALP level in blood can sometimes only be temporary, and equally that low ALP values alone should not be used to exclude people from taking part in clinical trials of new medicines (as is currently the case).

The researchers did not see this variation in ELF scores over time, and overall it was much more stable between hospital visits.

ALP did not relate to cirrhosis development

The researchers wanted to know if ALP blood test levels corresponded with developing fibrosis in later life. To do this, they compared blood test results to liver biopsy findings taken at the start and at the end of the trial. There was no association between ALP and the development of cirrhosis, or with an increase in fibrosis stage over 2 years. However, higher ELF scores at the start of the study associated with the development of cirrhosis at 2 years, and also a worsening in fibrosis stage during the same time period.

This suggests that ALP is not a good marker of disease progression in people with PSC (at least over a two-year period); whereas the ELF score more closely predicts cirrhosis development, irrespective of how much fibrosis there is to start with.

What do the findings mean? Expand

We have long been told that PSC doctors are looking for changes to our normal test results, rather than the absolute values of those results. For ALP, variation in blood test levels over time should be expected but should also be considered in combination with other test results over time, rather than at a single time point. This study also suggests that some patients can expect to see spontaneous reduction in their ALP levels, even after being high. Similarly, just because ALP values are low during one hospital visit, it does not mean they will stay low all the time, thus all the other aspects of monitoring (such as scans, colonoscopies etc.) are still very much needed.

These results suggest that ELF, rather than ALP may be more appropriate for use in future clinical trials as a measure of a drug’s effectiveness. Secondly, the study really drives home the point that people should not be excluded from taking part in clinical trials based on low ALP values alone, as they can still develop cirrhosis and experience a progression in their liver disease.

Encouragingly, the ELF score is emerging as a more reliable biomarker of disease progression in PSC, and further studies are required to explore how this can be used in clinical trials.

What further research is needed to build on these results? Expand

PSC still has no treatment to slow or stop progression, and clinical trials to test potential drugs are ongoing. The lack of reliable biomarkers adds risk to pharmaceutical companies considering trials in PSC, because we are still not certain how to truly measure the efficacy of potential treatments. We would like to see ELF studied further in PSC, and for trials to include patients irrespective of what their ALP values are. 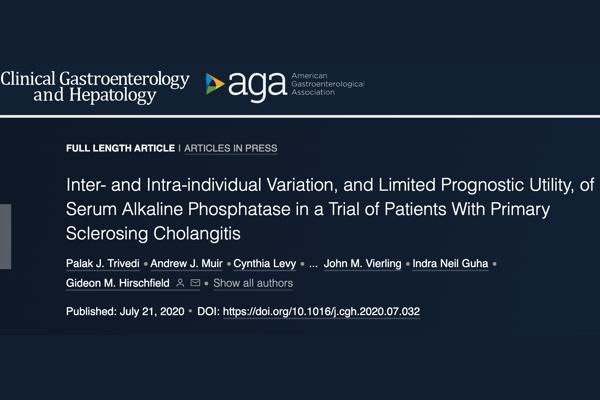 Member of the Association of Medical Research Charities