​Diagnosed with PSC as a young teenager, Andy needed a liver transplant some thirty years later. 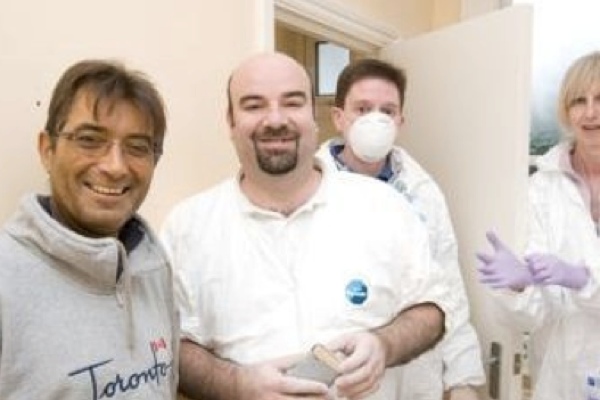 "Life’s full of clichés, ‘What a difference a year makes’, ‘A life changing event’, ‘A new start’. I can relate to all these.

This time last year I was sitting in my study at home in Essex watching my PC, occasionally nodding off to sleep, but doing my best to follow the workshop taking place in Verona. This was the only way I was able to participate in the management meeting my boss, organises each year to review and set the strategy for the team. Why, you ask, wasn’t I there? Well I’d just been put on the liver transplant list 2 months earlier, due to an illness that had been diagnosed over 30 years ago when I was just a teenager. After all these years my liver had finally decided enough was enough and the summer 2010 saw me approaching end stage liver failure.

Although not in physical pain, I could no longer travel, I was suffering from severe jaundice (apparently one on the best examples seen by the transplant co-ordinators) and a lethargy that was starting to have a major impact on my everyday life.

The jaundice did create some moments of light relief as many people put my colour down to a sun tan.

But, the most important reason for not travelling was that I could not be too far away from the hospital in case that all important call came through.

The hospital goes to great lengths to make sure you understand what to expect. You have a training session with the co-ordinators where you think you will explode from information overload, but at the same time giving you the comfort that you know they are there for you at any time. You meet surgeons, consultants, pharmacists, dieticians, social workers etc all before you are admitted for your transplant and all this is held together by a group of co-ordinators who work 24/7.  What they all do so well is make you part of their team so you are fully involved and informed all the time. They are an amazing group of people.

There are times in your life when you realise what makes a friend and so many of many work colleagues, for me, made that transition from work colleague to amazing friend.

The Orange Day introduced at work took on a new meaning to me and the PASS team and gave us the opportunity to focus on something that we could all relate to.

In November 2010, twenty of us descended on King’s College Hospital to decorate two flats (6 rooms with en-suite bathrooms). These are made available to patients’ relatives so they can stay close to the hospital whilst their loved ones are in hospital. These flats are run by LISTEN at Kings, a small committee of post-transplant patients who all organise many fund raising activities, act as mentors etc. On the day, I was limited to supervising but what a day! All completed on time, in full and to specification. The day was long, the work was hard, but the laughter was loud and the humour outstanding.

As December approached, I was spending less time in the office but thankfully still managing to work from home. The call came early Dec 2010 to let me know a possible liver was available. To be honest it was a very surreal experience, and we all, Sue, my wife and my daughter, and I experienced so many different emotions at once: relief I was going to get better (always look at the positives) but sadness that some other family was suffering for their loss and although we had been talked through every step there  still nervousness at entering the “unknown”.

As we all now know, everything went well (we could write a whole book about this, but won’t bore you all with that now) but this was the first cliché, ‘A life changing event’. I was home for Christmas 2011. A new year, a new life and time for me to set some goals for the coming year.  A work colleague suggested entering the British 10K in July. ‘No way’ I thought as I’d stopped going to the gym some 12 months before as I was just not feeling up to it, but then I thought, July is seven months away, time to get some training in, so what the heck. We both entered, so first goal set – complete the run and get some sponsorship for the hospital charity.

Next goal came by chance when I attended one of the support team meetings. I discovered there is an annual UK transplant games where anyone who’s had any transplant (kidney, heart, lung, bone-marrow etc) can enter from 3 to 80 plus. Key thing here is you get disqualified if you’re not on drugs! It was taking place in Belfast in August so there was the opportunity to do some more running and networking. Goal 2 set!

During January I had my story published in the local newspaper to raise the profile of organ donation as I realised I was one of the lucky ones to receive a transplant. There is a significant shortage of donors. Please sign up to the scheme and make sure your relatives know your wishes, as they can refuse the request if they don’t know what you want! Too many people die waiting for that oh so important call that never comes.

During the first few months I was obviously off work and in between hospital appointments I kept myself busy finding out what else I could do for the hospital and charity. A further article in the hospital annual report allowed me to say thanks to my surgeon and again get some more publicity for King's which is the leading liver unit in Europe and 3rd in the world.

Final key goal was decided when I went on my rugby team’s tour.  Watching everyone else out on the pitch, I decided I must get another full game in before the end of the year. I’d not played for more than 18 months and needed to prove to myself that I could still do it. Goal 3, my year was taking shape, but this was not a welcome goal with my family; they considered this was one step too far.

While all this was going on, life in general started to get back to normal. I was once again able to start going to Old Trafford to see United. May arrived and I was able to start my return to work, with full time following shortly after in July.

All in all July was a good month, back to work and then running with Seb through the streets of London on a very sunny Sunday morning trying to complete the 10K under 60mins. Sadly, that was not the case only managed 1hr 3mins 27sec and a torn calf BUT we did raise nearly £4,000. Thanks again to Seb for his support and to everyone who kindly donated.

As I’d managed to get such a speedy recovery and was fortunate enough to have no after effects, I was considered a great advert for what can happen once you have a successful transplant. With this in mind I was asked if I would make a presentation at a small seminar in South London to Donor Coordinators (those wonderful nurses who have the unenviable task of asking grieving families if they will allow their relative to donate their organs). From the feedback I received, it appeared they appreciated the opportunity to see the positive outcome of their vocation. So July ended on a high for me.

August followed and Sue and I looked forward to Belfast, even though the torn calf obviously had a significant impact on being able to compete in the TSUK games. I did complete one leg of the 50m freestyle relay, sadly not winning any medals, un-like all of my fellow King’s competitors, who all won at least one medal with several winning a number of golds. There were two very poignant moments for me during this fantastic event, which sadly seemed to pass the media by. Not a mention in any of the national press or TV, something that we will be working on ahead of the next games.

The first (and for all the competitors, easily the most emotional) was during the opening ceremony.  A number of rows at the front of the auditorium had been roped off and marked as reserved, we thought for the team from Belfast, but it was in fact for more than 100 representatives of donor families. There was a standing ovation as the roof was raised with cheers and applause, an experience I will never forget. These representatives were involved in medal ceremonies and presentations throughout the week-end, certainly the guests of honour.

The second was the 25m race where several children (some who were multi-organ transplantees) were so competitive but even the one who did not win had a broad smile on her face, clearly just so pleased to be talking part. Those children were an inspiration and one little boy who everyone fell in love with, was only too happy to tell you how he had been too poorly to run and play until Sidney the Kidney came along to help him.

September was a quiet month but I managed to get my game of rugby, Cracking game but sadly not on the winning side. Key point: I played the full 80 mins, so much for asking the captain to just play one half!!

Anyway, ‘What a difference a year makes’, hard to believe we were already organising Orange Day 2 at the Listen Lodges. It was heartening to find even more interest from the PASS team and others due to word getting around how good it was last year.

A very early start and much more co-ordination needed as we were doing so many jobs. Painting the halls, stairways, kitchen, outside windows (including one which wasn’t meant to be) and creosoting the fence. Quite a few of my fellow Listen members turned up to show their appreciation to and support the team. A subsequent article was published in the South London Post.  We are already planning 2012.

I’m approaching my 1st anniversary and life has changed so much. I have just completed mentor training which should allow me to work with pre- and post-transplant patients who need support, and I have done another presentation to more health care professionals responsible for donor support

If you’d asked me to predict what 2011 would have meant to me this time last year, I would have been nowhere near.

Written one year after his liver transplant, which was in 2011. Andy has now passed away but will be remembered fondly for his wit, his enthusiasm and for his will to help others.