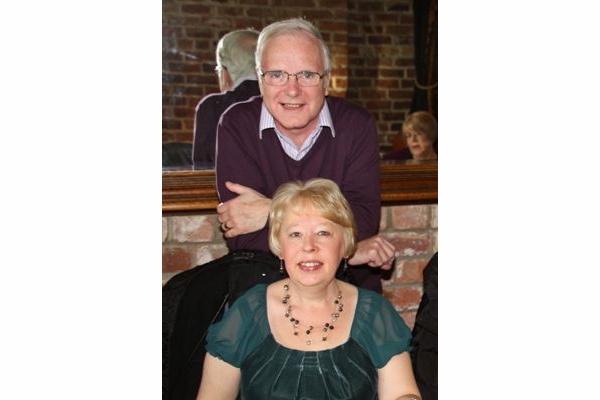 1974 was a significant year for me.  I married Margaret and I was diagnosed with ulcerative colitis. The two events weren’t connected!

After being quite ill for several months my local hospital managed to get the colitis under control and apart from the occasional flare up I stayed well for the next 20 years. Then in 1994 I began to itch all over. It was awful and sleeping was very difficult if not impossible. My GP thought that I had some sort of allergy but unfortunately he didn’t do a blood test which would have shown that that wasn’t the case. I was eventually referred to my local hospital where following some tests I was operated on. I was told that the bile duct which connected my liver to my intestine had rotted away and this was replaced using a length of my intestine.  About a week later I was told that biopsies taken during the operation had shown that I hadn’t got cancer but had got a rare bile duct disease called PSC. Its cause was unknown and there was no cure. I asked what the prognosis was and was told that the disease progressed very slowly and that I’d probably had it for several years without knowing it. It had so far only affected the bile ducts outside my liver but my liver itself was OK. On the one hand I might not have any further trouble from the PSC but on the other hand if the PSC got into my liver I might need a liver transplant in about ten years and it could be anywhere between the two, there was no way of knowing. To my great relief the operation had stopped the itching and I took the view that I would face any future problems from PSC if and when they arose but in the meantime I put it to the back of my mind and got on with my life.

For several years all went well until one night in July 2002, when the itch suddenly returned.  My GP and York Hospital tried unsuccessfully to stop the itch with medication, and after further tests I was referred to the specialist Liver Unit at St James Hospital, Leeds in February 2003.  There I was told that the disease had spread to my liver, but they managed to stop the itching for which I was extremely grateful.  Due to my liver not functioning correctly it was found that blood was being forced under pressure into some veins in my throat causing them to swell.  To prevent the veins bursting, which could have been fatal, I had several sessions of treatment to reinforce them.  In May 2003 another phase of the disease started, and I lost most of my energy and strength.  I quickly changed from being a lively 49 year old to feeling “half dead” when I woke up in the morning, and by tea time, if not before, I was totally exhausted.  I remember thinking that I felt more like 94 than 49.

My health deteriorated further, and I was told by one of the Consultants at St James that the only treatment which they could possibly offer me was a liver transplant.  He said that if I didn’t have one as my liver deteriorated further, the itch would return, my energy levels would continue to diminish and I would end up like a “couch potato” before dying an early death (I was told after my transplant that I would only have lived a few more months without a transplant). The Consultant booked me into St James for a four day assessment course to ascertain if I was suitable for a transplant.  He warned me that if I could have a transplant there was a 15% chance that I would not survive the operation, and stressed that the decision whether or not to go ahead would be mine.  I am a Christian and the possibility of dying didn’t worry me unduly, but I was obviously concerned for my wife and two adult children.  We discussed the situation and very quickly decided that I would go ahead with the transplant if I was offered one.  The assessment course established that I was suitable for a transplant and I was put on the waiting list with instructions to get to St James within two hours of being informed that a suitable donor liver had been found.

After three months on the transplant waiting list everything changed for me thanks to a donor and her family who were willing to help a complete stranger. I received “The Call” at just past 11pm one Sunday night and was given the gift of a new liver in a nine hour operation the following day, 20th October 2003. I was told later that I’d have only lived for a few more months without the transplant.

My new liver has truly given me a new life and I’ve now had 17 years of mostly good health and lived to see the arrival of my two lovely grand daughters Emily and Megan who I wouldn’t have known without my transplant. I’ve tried to make the most of the extra life that I’ve been given and also give help and encouragement to other people in the same situation that I was in.

The treatment that I’ve had from the Liver Unit at St James Hospital, Leeds has been fantastic as has that from various departments of York Hospital. Without them all, and my wonderful donor, I wouldn’t be alive today. I’m so grateful for everything that has been done for me and also the help and support that I’ve received from my family and friends. My Christian faith has also helped me tremendously. The bible talks about the peace of God which passes understanding and I’ve certainly experienced that over the years. I know that every day of the last 17 years has been a bonus for me.

If anyone reading this hasn’t yet registered to be an Organ Donor please do so and also tell your family your wishes. Your organs are no good to you when you die but they maybe could save several other lives.

Keith talking about his liver transplant

Gary on Family Life with PSC

Gary on Liver Transplant in 2017

What You Need To Know If You Have PSC