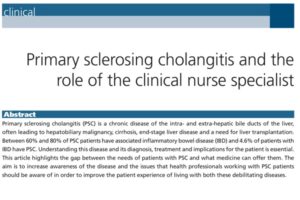 Co-authored by PSC Support, an article about the role of inflammatory bowel disease (IBD) nurses was published.

Co-authored by Martine Walmsley (PSC Support), an article about the role of inflammatory bowel disease (IBD) nurses was published in the December 2015 Liver supplement of Gastrointestinal Nursing Journal.

With at least 8% of people with IBD estimated to also have PSC, it's important that IBD nurses are able to both spot potential PSC symptoms and holistically manage those of us already affected with both ailments. The article enables IBD nurses better understand PSC and be alert to PSC symptoms in their patients.

Thank you to everyone who shared their experiences of IBD and PSC and to those who took part in our IBD nurse care poll, which helped inform some of the article's content.