Which COVID-19 Vaccine Priority Groups are People with PSC in? 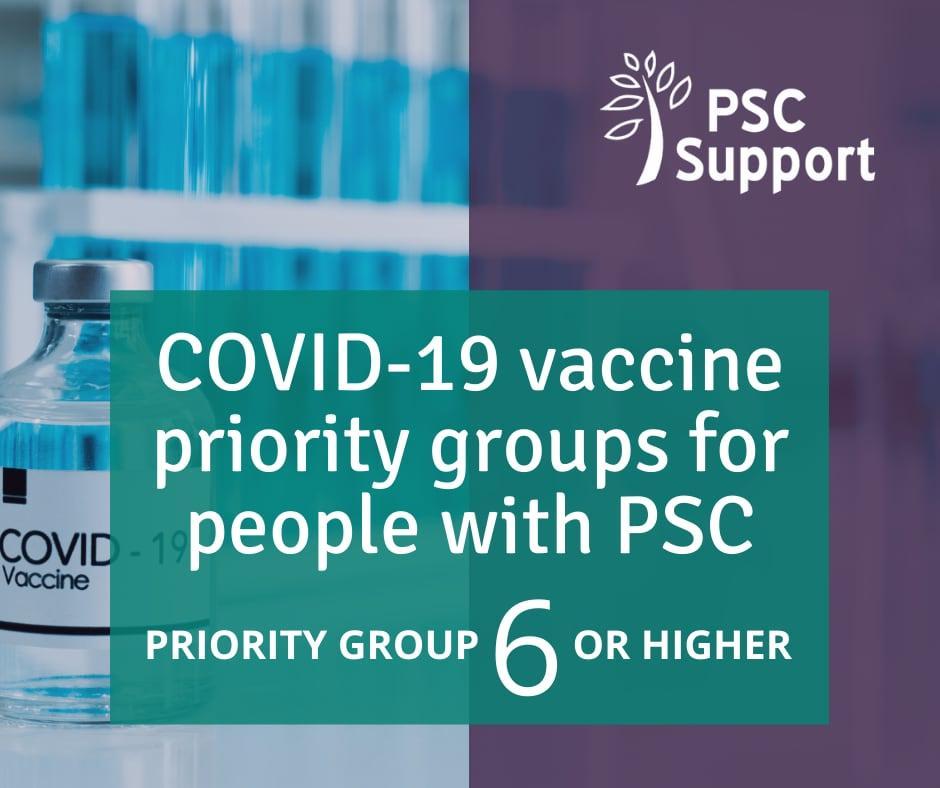 People with PSC are in priority group 6 or higher

If you've been told you are not in a priority group for the COVID-19 vaccine, and you have PSC, please get in touch so we can help.

Each UK nation is prioritising patients according to the guidance set out by the JCVI. It is explained in full here and set out in the table below.

PSC (primary sclerosing cholangitis) is a rare liver disease that can lead to cirrhosis. Most people with PSC are young and appear at low risk for COVID. However, if cirrhosis is present, such people are in the clinically extremely vulnerable (CEV) group (priority group 4). (People with PSC may also be in group 4 because they have had a liver transplant or because of the medications they take. These people will have been advised to shield.)

Even those without cirrhosis remain at increased risk under priority group 6 according to the recommendations of the JCVI, and the national guidance of England, Northern Ireland, Scotland and Wales.

NHS England confirmed to PSC Support on 27 January that “people with PSC will be called for the Covid vaccine (as they are for flu) in group 6. Unless they are also clinically extremely vulnerable, as decided by the Chief Medical Officer, in which case they will be called sooner (group 4).”

How we can help

If you have been told you are not in group 6...

If you have PSC and are advised that you are not in priority group 6 or higher, please get in touch with us so we can give you a letter to show your GP. This letter explains why you are in group 6 (or higher). Let us know if you are in England, Scotland, Northern Ireland or Wales so we can send you the right letter.

for their support in preparing the letters and for being national contacts for GP clinical enquires about the vaccines.

Get the latest COVID-19 vaccine information for PSC patients
What do we do ?
Your healthcare
Ask the Expert

How Effective is the COVID Vaccine for People with Weakened Immune Systems?

COVID-19 Vaccine for Households of Those with Weakened Immune Systems

COVID Vaccine for People on the Transplant Waiting List

COVID Vaccines and the Immune System

What COVID-19 Vaccine Priority Groups are People with PSC in?