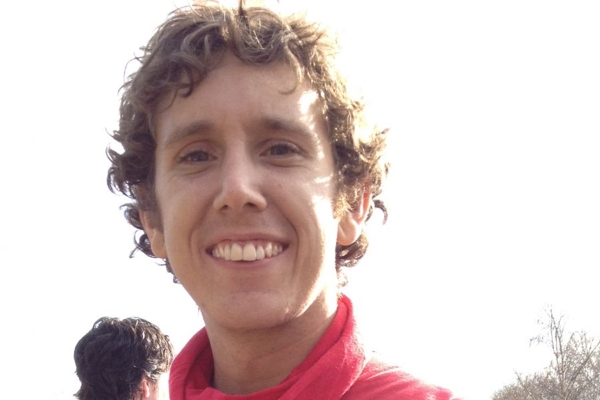 “The first symptoms that I had for PSC came out of the blue really. A few years prior to this, I was diagnosed with inflammatory bowel disease (IBD) and was on medications that were managing the symptoms of this.

Then one day, my skin started to feel really itchy, like it was being prickled by something sharp. Itching my skin offered relief, but when I stopped, I felt the need to start again. Having a cool shower or a bath seemed to help, but I was itchy again afterwards. The itching kept me awake as I had to scratch my skin constantly. For three nights I got very little sleep due to the itching and by then, I was itching that bad that my skin was starting to bleed. There was no visible rash or anything. Just skin damaged caused by myself. I was exhausted and irritable. I felt, and probably looked, like a crazy guy.  So, I took myself to my local A&E department. Not because this was an accident nor an emergency, but because I knew I would get sorted quicker this way.

The doctors ran a series of blood tests and they found that some of my liver enzyme results were rather high. As was my bilirubin levels, which explained the itching. They gave me some medication called Ursodeoxycholic acid, which worked like a charm. The itching stopped and I could finally get some rest.

At my next gastroenterology appointment, my consultant decided that I should have a liver biopsy to found out why my blood test results showed that some of my liver enzymes had increased, even though the itching was now under control. The liver biopsy was not very nice and it wasn’t successful either: the results were inconclusive. So, I was then sent for an ERCP, which was, I’m sorry to say, another unpleasant procedure. However, the ERCP was worth having as the results suggested that I had PSC. This was explained to me at my next appointment with my consultant. He also said that I would need to have a liver transplant within 5 to 10 years. This was in 2004.

Since then, the only symptoms that I experienced were related to my IBD. However, in 2010, I was referred to a liver specialist because I was becoming jaundiced and I was experiencing a pinching sensation in the area where my liver is situated (URQ). They did their own tests, MRI scans, a liver biopsy, an ultrasound scan and an ERCP, just to confirm that I had PSC. But from the results of these tests, they felt it was necessary for me to see the liver transplant team at St James’ Hospital in Leeds for a liver transplant assessment. However, by the time my appointment came through to have my transplant assessment, my symptoms had started to ease and I was feeling much better.

I went to Leeds for my transplant assessment in 2010 and there, I had a range of non-invasive tests like an ECG, Spriometry tests, an ECHO, MRI, Ultrasound, and I saw a range of different people like an anaesthetist, surgeon, pharmacist, dietician, social worker etc. All this was to make sure that I could physically and mentally cope with going through having a liver transplant. All the results suggested that I could, but they felt that at that time, my PSC was not advanced enough to risk the major complications of having to go through such a major operation. So, I was sent home and remained under the care of my liver specialist back home in Manchester.

Since then, my liver results have worsened again. I am a lot more jaundiced, the pinching sensations in my URQ are more intense and more painful, and the scarring in my liver has started to increase my blood pressure, causing oesophageal varices (veins in my throat), to burst and bleed blood into my throat and mouth. I have had a few endoscopic procedures to fix these varices to prevent further bleeding. However, the slow loss of blood had caused my haemoglobin levels in my blood to decrease, making me even more tired and confused. For this I have had to have quite a few blood transfusions. In 2011, I received 15 units of blood.

My liver results continued to worsen and, along with my low haemoglobin levels, have resulted in a decrease in my memory function. This can be very frustrating, to yourself and for your anyone around you. My fatigue worsened too. All I wanted to do was sleep.  My jaundice also got worse. People in the street began to stare and would do a double take when I walked past, which was not a very nice experience. My wife began to really worry about me and seeing how my symptoms affected her made me feel awful. Depression set in. Everything was just becoming too much to tolerate. I needed more help.

In 2011, my liver specialist thought I should be seen by the Leeds transplant team again. So, I went for my second liver transplant assessment. However, this time, the transplant team decided that the risks of major surgery were outweighed by the consequences of me not having a liver transplant. So, in November 2011 I was placed on the liver transplant list. Waiting for that life-changing phone call is a very stressful and emotional time, for PSC patients themselves and for their family and friends. Letting things settle and processing your thoughts in your mind really does help. But so too does talking about and sharing your feelings. Learning to be open about absolutely everything helps as well. If you think you’re alone, you’re not. There are people out there who can help you. But in order to be helped by others, you must first accept that you need help yourself.

At the time of writing this, I have been waiting for “that call”, for 126 days. The call could literally come at any time. So, plans are in place so that I can literally drop whatever I’m doing when the call comes and get myself to the hospital, knowing that the important things in my life are going to be taken care of. I have to say that I would not be coping as well as I am doing without my wife, my family and my friends. But I would say that for me, meeting Paul, who had just had a liver transplant due to PSC when I was having my second transplant assessment, has been the best thing for me. It has shown me that there is life, a good life, after having a liver transplant and that even though it is going to be the hardest thing I’m ever going to have to go through, it will be worth it.

So until then……Be strong. Be brave. Love and live.”

Read more about Ben's PSC Story post-transplant in his Blog:

What we do and why it is so important. #LetsBeatPSC