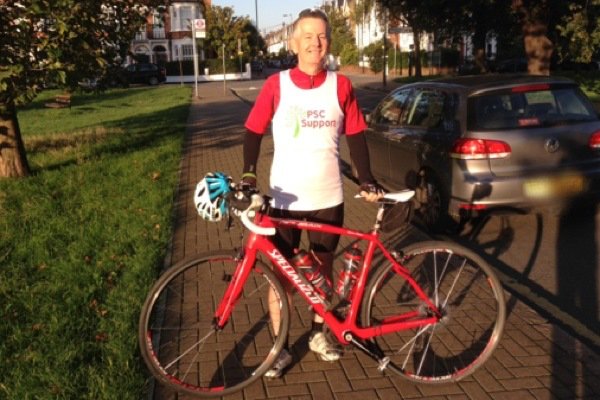 The London To Brighton (L2B) bike ride is 54 miles from Clapham Common in London to the Brighton marina, cycling on fairly quiet roads through the Sussex countryside.

Sunday September 6th was a beautiful sunny day, and we set off from the start point on Clapham Common around 8am along with hundreds of other cyclists. We were set off in groups to avoid congestion on the roads, and the field soon thinned out as everyone found their own pace. The route was clearly marked with temporary direction signs so the navigation was fairly straightforward. There were several thousand riders in total, covering a wide range abilities, fitness levels, and quite an assortment of different types of bike.

The event was well organised, with several rest stops where toilets and water were available. There was a lunch stop around half-way where a buffet was laid on, along with some music and entertainment to create a party atmosphere. Fortunately the weather was kind, and most riders spent time relaxing in the park over lunch, and resting their tired muscles. The ride did have quite a ‘sting on the tail’ though – the infamous Ditchling Beacon. This is a very steep hill where you have to climb over the South Downs, before a long final descent into Brighton. The organisers had arranged for the road up Ditchling to be closed for the day, so we had a traffic free ascent which was much safer given the large numbers of cyclists who were walking up the hill. There was a helpful sign at the bottom saying ‘this is the big one’ – they weren’t kidding! We all had a rest at the top and stood cheering other riders on as they walked or cycled up the hill. At this point there were about 7 miles left to go, but it was all downhill to the finish!

I think it is important to do a bit of training before tackling an event like this. However you don’t have to be a ‘Bradley Wiggins’ as you will have all day to complete the ride, and can always walk up any of the steep climbs along the way. Most types of bike would be suitable, but it’s essential to have a range of gears to help you up the hills. In the end, it just needs a basic level of fitness and a bit of determination to keep going and ignore any discomfort, particularly in the nether regions.  In my case, I was pretty fit already as I had completed a 1000 mile cycle from Land’s End to John O’Groats just a couple of weeks earlier.

Fiona The Vitality Big Half Marathon