PSC and other autoimmune diseases

Most people with PSC also have another immune-mediated disease

Nearly three-quarters of people with PSC also have another immune-mediated disease (including IBD), and almost a quarter have two or more 46, such as type 1 diabetes mellitus, thyroid disease and coeliac disease.

It is useful to note that there are other conditions (that are immune-related liver conditions). For reference, we’ve included a short description of the most common.

AIH is an autoimmune liver disease where the body’s immune system attacks its own liver cells (hepatocytes), causing inflammation and damage. 6.2%-14% of people with PSC also have AIH 2,46. PSC and AIH can occur together or develop at different times (AIH is often first), usually in young people under 25 years of age 1,47.There is no consensus on the name for this condition in children and young people and you may see it referred to as:

Although PSC and AIH have overlapping features, they are separate conditions and are therefore treated separately 49.

Primary biliary cholangitis (PBC) is another autoimmune liver disease which targets the very small bile ducts. Despite the similarities to PSC, it’s not the same disease and is not to be confused with PSC. PBC and PSC are very different conditions. 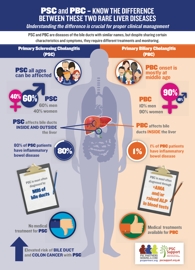 Whereas PSC affects both the small and medium/large bile ducts, PBC only affects the small bile ducts within the liver itself and is not associated with scarring in the bile ducts 50.

Unlike PSC, PBC does not share an association with IBD, bowel cancer or bile duct cancer. However, individuals with PBC can occasionally develop thyroid problems, dry eyes (a condition called ‘Sicca syndrome/Sjogren’s syndrome) or intolerance to gluten in wheat (coeliac disease) 51. Professor Hirschfield described PBC as being like a ‘necklace of white cells around small bile ducts’ whereas PSC is like ‘concrete around the bile ducts.’

IBD is short for inflammatory bowel disease. It is a long-term (chronic) condition that involves inflammation of the intestines. As many as 80% of people with PSC also have IBD in Northern Europe 1,52. Current thinking suggests that if you have PSC but no marked symptoms of IBD, microscopic inflammation in the bowel may still exist 14.

This link between PSC and IBD has interested researchers (and patients) for a long time but, until now, the genetic relationship between the two diseases has not been fully understood. There have been clues that the IBD a PSC patient has (called PSC-IBD), is not the same as IBD in the general population 11,14,53,54.

In a landmark study 15, Professor Tom Karlsen and the International PSC Study Group (IPSCSG) studied DNA in people with PSC and in people with IBD. They found many regions of the genome associated with both PSC and IBD risk, but they also found others that were only associated with risk of PSC. This is critical, because it shows that there are unique genetic aspects to PSC, and the IBD seen in people with PSC cannot be explained by shared genetic risk. Simply put: PSC is not necessarily a complication of IBD; PSC is likely a distinct, separate condition.

More research is needed to understand the genetic and environmental factors involved in the development of PSC-IBD 14.

Generally speaking, IBD is still described as ulcerative colitis (UC) or Crohn's disease (CD) even though the IBD associated with PSC thought to be a different kind of IBD altogether (PSC-IBD) with its own distinct features. It is thought that:

UC in people with PSC appears to be distinct from those with UC alone 55. Characteristic features include a mild course of UC with:

Even though their UC is usually mild, people with PSC and UC are at a greater risk of developing colon cancer than those with UC alone 57. This is why people with PSC-IBD need an annual colonoscopy to look for pre-cancerous changes, allowing doctors to take action before a cancer develops.

Regular colonoscopies with biopsies are recommended for people with PSC and IBD 1,4,58

IgG4 is a type of antibody produced by the immune system to fight infection. It is also an important antibody involved in allergy, though it is not felt the condition arising from it is necessarily an allergic condition.

In IgG4-related disease (IgG4-RD), too much IgG4 is produced. It is characterised by mass lesions and/or strictures and can affect almost any organ, though the most common organs affected are the pancreas and bile ducts (in that order) 59. When it affects the bile ducts it is called IgG4-sclerosing cholangitis (IgG4-SC) or IgG4-associated sclerosing cholangitis (IAC) and can mimic PSC and bile duct cancer 59,60.

It is important to make the diagnosis because the disease responds well to treatment with steroids, unlike most patients with PSC 58,61.

People with PSC can have raised IgG4 levels but may not have IgG4-RD. It is not clear whether IgG4-SC and PSC are separate conditions entirely or if they are variations on the same spectrum. There is the suggestion of an overlap between PSC and IGg4-SC because 9-15% of patients with PSC have increased serum IgG4 levels, and some have responded to steroid treatment, especially when younger 61,64.

While elevated IgG4 levels in PSC do not provide a diagnosis of IgG4-SC, it is recommended that where there is a suspicion of IgG4-SC, attempts should be made to make a confirmatory diagnosis, in line with international consensus guidelines 61. A delay in treating IgG4-SC can lead to poorer outcomes 59.

UK information about IgG4-RD and the IgG4 Registry