Liver transplant and PSC
Before Transplant
After Transplant

1. The Surgery
2. Your Recovery

The surgical procedure starts by opening the abdomen with an incision (usually shaped like an “L”). The sick liver and the gallbladder are removed, then the new liver is ‘implanted’, which means that it is put in the abdomen in place of the old liver, and connected to the blood vessels. Typically, in liver transplants, the common bile duct from the donor is joined to the recipient common bile duct. In PSC transplants, this doesn’t usually happen because the old bile duct still has the potential to have PSC and so the surgeons don’t usually create a normal anastomosis (join). In PSC, the existing bile duct is removed, and something called a Roux loop (Roux en Y) is formed.

How long does a liver transplant take? Expand

The procedure usually takes up to 8 hours but can be longer or shorter, depending on the complexity of the case.

What happens after my liver transplant? Expand

After surgery, you'll wake up in an intensive care unit (ICU). You may have tubes in your mouth (to help with breathing), nose (to provide fluids and nutrients) and wound (to drain excess fluid).

These will be removed after a few days and you'll be moved to a regular hospital ward.

What is the post-transplant ‘psychosis’ that can occur for some patients after a long anaesthetic? Expand

After a big operation, patients can sometimes appear muddled. This is referred to as post-transplant ‘psychosis’. It is often due to a number of reasons: the operation, a complication of the operation and sometimes due to the immunosuppressant drugs. However, doctors find the cause and can reverse the situation rapidly.

How long will I spend in ICU after the operation? Expand

This varies from patient to patient. Normally though, it is 48-72 hours before you will be stepped down to needing less intensive medical and nursing care.

How soon do they take out/off all of the tubes and wires? Expand

Often there is a sequence for the tubes to be removed. First of all, when you are able to breath yourself comfortably, the doctors remove the tube from your lungs (the so-called endotracheal tube). Over the next 48 hours doctors will then normally remove a number of lines from your neck that have been used to monitor you during the operation. These include tubes called a bypass line, a central line, an arterial line and a Swanz Ganz sheath. Obviously if you are not recovering quickly and you need to spend more time on the intensive care unit, the doctors may delay removing these tubes so they can monitor you more carefully.

A week after the operation, in King’s College Hospital.
How many staples will I need and does it hurt having them taken out? Expand

Not everyone will have staples. Some hospitals use dissolvable stitches which will disappear after over time. The number of staples you have will depend on the type and size of the incisions made and can be anywhere between twenty and fifty plus. They are usually removed after about 3 weeks (often over 2 days). Some staples may be uncomfortable when they are taken out, and others won’t, because some areas heal better than others.

Tips for that first poo! Expand

Your bowels will probably be unsettled for a while after your transplant and you may not be able to eat solid food for the first few days. It can then take a few days before you pass your first stool, it can be normal to go seven days or so before this happens. As you can imagine, this can be very uncomfortable and you may be bloated and get some pain.

Tips from people who’ve had transplants:

When can I have my first shower post-transplant? Expand

You should ask your doctors/nurses, because it varies from person to person, but you will usually have your first shower once the drains (for excess abdominal fluid) are taken out. This may be between five and 15 days after the transplant. Initially you may be less mobile and in a lot of discomfort, but the nurses can help you wash. Some people are given wipes and a bowl of water to wash with if they can’t yet shower.

How soon can I go home after my liver transplant? Expand

You'll usually be able to go home within two weeks although this can differ from person to person. Sometimes you can go home in less than a week, whilst others may need to stay in hospital well beyond two weeks.

How long is the typical recovery period? Expand

It is generally accepted that the fitter and healthier you are before you have your transplant, the quicker your recovery. However, this is not always the case and there are sometimes complications. Some people recover quickly and feel ready to resume everyday activities within a few months post-transplant but this varies from person to person.

Will PSC come back after transplant? Expand

PSC does sometimes come back after transplant. It is called recurrent PSC (rPSC). It is difficult to say how likely PSC is to return for any individual because rPSC is not easy to tell apart from other post-transplant complications that can mimic PSC and therefore not consistently recorded in health records. Research tells us it can return in anywhere between 6% and 60% of patients although a frequency of around 20% is most often seen 2.

It is important not to worry that a sudden increase in liver blood tests means that rPSC has developed. Many factors can affect blood test results after transplant and your transplant unit will be used to dealing with this.

How many transplants can a person have? Expand

There is technically no limit, but the risks do increase as the number goes up. It would be unusual for a person to have more than 3 transplants, but each case is considered on its own merits. 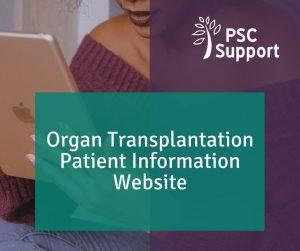 NHS Blood & Transplant, in partnership with the British
Transplantation Society, have launched a new patient information website for organ transplantation. 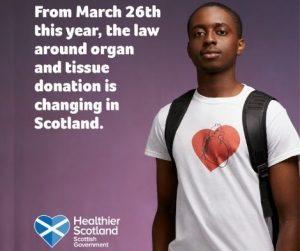 Scotland is moving to an opt-out system for organ and tissue donation from 26 March. 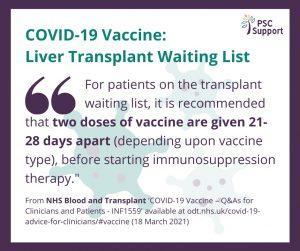 COVID Vaccine for People on the Transplant Waiting List

If you are on the transplant waiting list, did you know that NHSBT recommend that you have two COVID vaccine doses 21-28 days apart (depending upon vaccine type)? 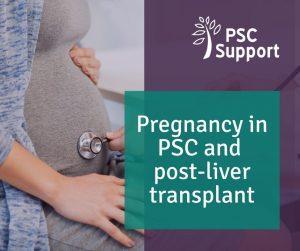 If you are thinking of starting a family and you are affected by PSC, we’ve got some helpful information for you.