Know the difference between the two rare liver diseases, PSC and PBC

Just diagnosed?
Routine care for PSC
How to explain PSC

Primary sclerosing cholangitis (PSC) is part of the family of ‘cholestatic liver diseases' 4. This means it is a disease that affects the bile ducts – tubes that deliver bile from the liver to the small intestine.

PSC occurs because of inflammation in the bile ducts (cholangitis), which results in hardening (sclerosis) and narrowing of the ducts 1. As a result, bile cannot be released properly and it builds up in the liver where prolonged exposure results in liver damage.

The medical abbreviation for primary sclerosing cholangitis is PSC. Although medical abbreviations are designed to simplify disease names, they can sometimes cause confusion; particularly as other liver conditions incorporate similar names. Another closely related condition that you may have heard of is PBC (originally called primary biliary cirrhosis, recently renamed as primary biliary cholangitis). 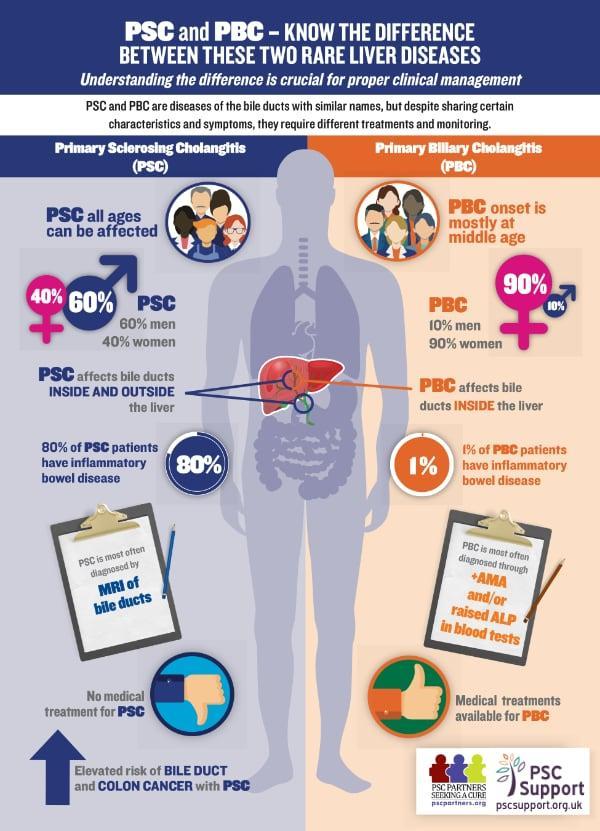 Despite sharing common symptoms (such as itching and fatigue) and having comparable acronyms, PSC and PBC are distinct entities and exhibit important differences, which include the site of tissue damage within the liver, associations with inflammatory bowel disease (IBD, which includes ulcerative colitis and Crohn’s disease) response to treatment, risks of disease progression and cancer risk. 73

In PSC, a key feature is the development of scar tissue (fibrosis) that predominantly affects the medium- to large-sized bile ducts within and outside the liver. This can most often be identified with a special MRI scan (called MRCP), although occasionally a liver biopsy is needed for confirmation (of small duct PSC). PSC can affect men and women at any age, although it is commonly diagnosed in the fourth decade of life, most often in the presence of inflammatory bowel disease (IBD). 1

Close monitoring of PSC patients is vital. Because of the increased colon cancer risk in PSC patients with ulcerative colitis, and annual colonoscopies are advised. Moreover, the presence of colitis is associated with a greater risk of liver disease progression and bile duct cancer (cholangiocarcinoma).74

Individuals with PSC can occasionally develop abdominal pain and fever, which may suggest infection of the bile ducts called bacterial cholangitis. Although the latter can be treated with antibiotics, no currently known treatment has been shown to slow the progression or cure PSC. There are, however, several clinical trials underway that aim to slow progression of liver disease. 75

By contrast, PBC mainly affects the small bile ducts in the liver itself and is not associated with changes in the large bile ducts of the liver and therefore the bile ducts appear normal on an MRI scan 50 In the current era, PBC can be identified through special antibody tests (performed on blood sampling) and liver biopsy is rarely needed.

Over 90% of individuals with PBC are women, and the condition is most often diagnosed in middle age via a series of blood tests (see Table 1). Approximately two-thirds of patients with PBC can improve their liver blood tests whilst taking ursodeoxycholic acid (UDCA), and it is well recognised that this correlates with improved survival and a lower risk of liver transplantation. 73

Unlike PSC, PBC does not share an association with IBD, colonic cancer or bile duct cancer; however people with PBC with advanced disease can develop liver cancer (HCC), similarly to people with liver cirrhosis from other causes. Individuals with PBC can occasionally develop thyroid problems, dry eyes (a condition called ‘Sicca syndrome/Sjogren’s syndrome) or intolerance to gluten in wheat (coeliac disease) 51. It’s important to note that people with PSC can also develop other immune-mediated attacks such as thyroid disease, coeliac disease and type 1 diabetes.

It is important to recognise that PBC and PSC are different diseases; stemming from the way they are diagnosed, the association with IBD, and the way they are monitored and respond to treatment. The layers of complexity in PSC require the care of clinicians experienced in treating PSC and knowledge of current PSC research.

Table 1. Similarities and differences between PSC and PBC

This article was originally written in 2015 in association with Professor Gideon Hirschfield and Dr Palak Trivedi as part of a joint education campaign on the differences between PSC and PBC by PSC Support and PSC Partners.