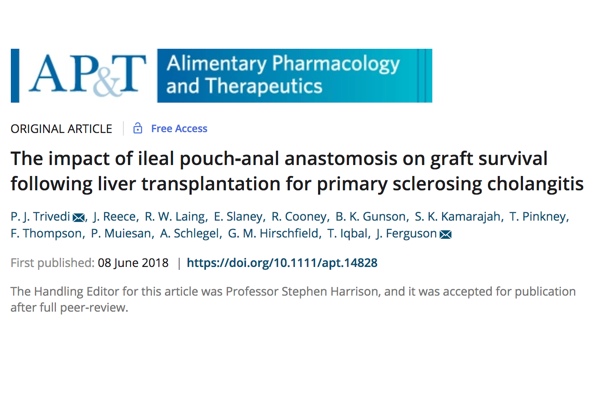 A research paper was published in June 2018 by a team led by Dr Palak Trivedi (University of Birmingham), looking at the impact of colectomy type following liver transplant for PSC. When colitis does not respond to medical treatment, you may be offered surgery to remove the large intestine (an operation called ‘subtotal colectomy’).

Dr Trivedi found that people with PSC who needed colectomy and retained an end ileostomy experienced fewer complications related to, and after, liver transplantation compared to those who underwent formation of an IPAA.

In addition, patients choosing to keep their ileostomy intact had the lowest risk of needing another transplant, developing PSC recurrence or problems related to liver transplant blood supply compared to the IPAA patient group or those who did not undergo colectomy.

These new findings suggest that keeping an end ileostomy may be protective to the liver following transplantation for PSC. This protective effect was not found for patients needing colectomy who then go onto have their bowel ‘re-connected’ with an IPAA.

The authors speculate that one of the reasons these differences may arise is because there are more episodes of gut inflammation in people with PSC and IPAA (who often develop pouchitis) than in those with an end ileostomy.

While further research is needed, these research findings are important as they allow patients and their healthcare professionals to take more informed decisions if colectomy is needed, particularly when PSC liver disease can progress to the point of needing a liver transplant down the line.

10 things you need to know first about PSC

What to ask your doctor at your next appointment