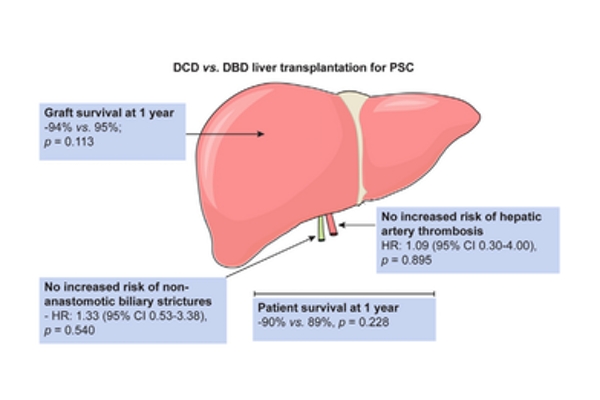 PSC varies from patient to patient, and many go on to live normal lives. Others however, may be affected by symptoms such as fatigue, itch and abdominal pain. Some individuals do unfortunately develop progressive disease, and liver transplantation is the only life-saving treatment at this stage.

Although PSC is a rare disease, it is now the reason for more than 11% of all liver transplant operations performed in the UK 93 - second only to alcohol-related liver disease and liver cancer.

DCD and DBD organs for liver transplant in PSC. Image courtesy of authors (Journal of Hepatology).

Best use of available organs

Thankfully, the number of transplant operations being performed year-on-year are increasing, together with a rise in donor registrations. However, the supply of suitable donor organs does not meet demand. Researchers are thus constantly looking for ways to make the best possible use of available organs.

The most common source for a new liver is one retrieved from an individual whose heart is still beating, but brain has ceased to function - termed organ donation after brain death 81 (DBD). The reason for DBD liver being ideal is because the liver is receiving an adequate supply of blood, nutrients and oxygen up until it is taken for transplantation. Less commonly, liver transplantation may have to be performed using an organ donated after circulatory death 82 (DCD).

Historically there has been a perception that post-transplant outcomes are worse using DCD livers, given that the organ would experience a period without an adequate blood supply, effectively starved for some time before it is retrieved. As a result, early experiences of DCD livers particularly in very sick individuals, raised concerns over transplant-related bile duct problems, kidney injury, and poor overall graft function.

These anxieties are particularly relevant for patients with PSC who are often quite young and have lived with bile duct disease for many years. Consequently, many liver transplant centres across the world have avoided DCD livers in PSC liver transplantation, despite the fact some patients die on the transplant waiting list.

Nevertheless, a study published in 2017 from researchers at University of Birmingham 83 evaluated outcomes of over a decade of liver transplantation, across two groups of PSC patients: those receiving DBD livers vs. DCD transplants.  The investigators were able to show that with careful patient and donor organ selection, DCD transplantation in PSC achieves very similar outcomes to those receiving DBD livers.

Highlights from the study included:

It’s important to understand that whatever the underlying liver disease, DCD liver transplant recipients tend to have a higher rate of bile duct problems in their first year, and PSC is no exception. The rate of graft loss in PSC was significantly greater compared to non-PSC patients, but looking at PSC patients alone, DCD vs DBD transplantation did not adversely affect overall patient survival or graft survival rates, thus the conclusion that DCD transplants could be a viable option for selected PSC patients in the future.

The use of DCD livers in transplantation is a developing practice, and longer-term outcomes have yet to be determined. Similarly, while the transplant centre at Birmingham is one of the busiest in the UK, this study only represents experience at one centre, and the authors acknowledge the importance of external, independent validation of their findings. However, given the complexity of PSC, and with the forthcoming changes to allocation policy in liver transplantation in the UK, continuing evaluation of risks and post-transplant outcomes for PSC patients is critical.