Maria shares her experience of her two pregnancies with PSC

I was diagnosed with PSC in my late 20s. I learnt it would mean lifelong medical care and a reduced life expectancy, but also understood that the path of this disease is very unpredictable. Would I be able to become a mum?

My consultant advised me to "get on with" any plans to start a family. PSC is a progressive condition, so I was never going to be any better than I was at that point. I was referred for pre-pregnancy counselling - which was a hospital appointment with my liver doctors, obstetrician and gastro doctors who manage my IBD (I also have ulcerative colitis, something that fortunately I have managed well since my first "attack" at the age of 16).

There were five medical professionals at this appointment. They ran me through the risks of a PSC pregnancy and reviewed my medication to see what was safe and not safe to take while pregnant. I was advised my pregnancy would be classed as "high-risk" and would require consultant led care, and it was recommended that I have the baby at a specialist liver centre; in my case this was King's College Hospital.

As soon as I was out the door I burst into tears. It felt so overwhelming. Why did I need so much medical attention before I had even tried to conceive? This should be a time of excitement and anticipation. On the other hand, I was of course grateful that I was being looked after so carefully and I had confidence that my pregnancy care would be in the best possible hands. All I had to do now was get pregnant!

My bile acids were too high

I was lucky to conceive quickly. My pregnancy was managed well with more frequent scans, blood tests and consultant appointments. Things were going smoothly until I was 28 weeks pregnant. I remember being in the car when I received a call from the hospital - my blood test results had come in and could I come into hospital ASAP.  We did a U-turn and drove straight to King’s. Once there, the doctors explained that my bile acids were too high, which meant I had obstetric cholestasis ("OC") - a rare pregnancy complication which carries a small risk of the baby being stillborn. I had been warned in advance that I was at higher risk of OC due to having a liver disease, but it was still a shock. The baby was checked, my medication was increased and a new plan was made by the medical team to induce me at 37 weeks, or if my bile acids reached 100, whichever was sooner.

At the time I was still working long hours as a solicitor and commuting into London. I had weekly consultant appointments, plus additional tests. My liver symptoms were worsening and my bile acids continued to rise, which meant the risk of stillbirth did too. At 28 weeks I was signed off work, and actually I have never been back.

I made it to 37 weeks when I was induced and met my baby girl, Chloe, for the first time. Hands down, this was the best moment of my life so far. It was such a relief and she was perfect.

With Chloe, my bile acids had risen to 100 on the day I was induced. With my second pregnancy my bile acids were already over 100 at nine weeks. I was terrified. My consultant was doubtful this could even be OC, as it is almost never the case that it presents this early. I was itching terribly - a symptom that has plagued me ever since, and sleep was near impossible. At our 12 week scan we had more bad news - the baby's nuchal measurement was almost double the upper limit of normal. We were told this meant there was only 30% chance that our baby did not have a serious abnormality and were referred for further tests. This was, I am told, unrelated to PSC.

It felt like I had done the wrong thing in getting pregnant again. We were so lucky to have a healthy two year old, why were we rocking the boat with a further pregnancy? Could we mentally cope with a stillbirth, or physically cope with a disabled baby?

Further genetic testing gave us some reassurance that our baby was unlikely to have a birth defect - the odds reversed to 70/30.

In the meantime, I was itching until I bled and could not sleep at night. I was back and forth from hospital all the time for extra monitoring and tests. I would be nervous every time the phone rang from an unknown number - had my results come in? Were they bad?

Alice arrived into this world fighting

The medical team reviewed my case and decided the best thing would be to induce me at 34 weeks. The baby would be premature, but it was better to get the baby out.

In the end I was admitted to hospital at 33 weeks. Now they were more worried about me than the baby. My liver blood tests had rocketed, and reflected the signs that I was now showing advanced liver disease. I was jaundiced for the first time, and the itch and insomnia were intolerable.

I was given steroid injections to help mature the baby's lungs and was induced just before 34 weeks. Alice arrived into this world fighting, and I am forever thankful that I got to hold her before she was whisked to ICU - something I was warned I may not be able to do. She was a good weight of over 4lbs and did remarkably well, spending only 3 weeks in hospital. I had a few post pregnancy complications but was discharged after a short spell and once home we were a happy family of four.

I feel so blessed to be a mum of two girls

I understand that for some PSC'ers, their symptoms actually improve with pregnancy, but for me pregnancy took a toll on my body and my PSC progressed quickly. Thankfully it seems my condition is now stabilising, and some ERCPs have helped by opening the narrowed bile ducts in my liver.

Looking back, I feel so lucky and blessed to be a mum to not only one, but two girls. I am eternally grateful to the support I had at King’s, and to my superstar obstetrician who worked with my liver team to ensure I was closely monitored and always knew of the plan in place.  My experience was of course very different to the "natural" births promoted by NCT classes, but actually I found induction straightforward and the births were a positive experience for me – I was so relieved to have carried both babies to the point they were viable. This was the end of the months of anxiety. My girls were here!

I do worry about what the future holds. I am told that the girls are highly unlikely to inherit PSC, although they are at more risk of having an auto-immune disease. I also worry that I won't be around to see the girls grow old, or may become too poorly to look after them. But I am optimistic - there is so much research going into finding a cure for this disease, and I feel there is plenty of life in my liver and me yet. 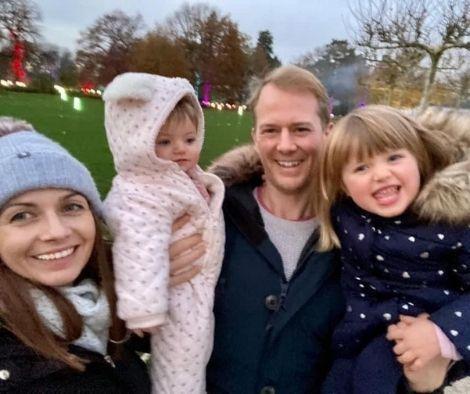 Read our comprehensive information on pregnancy in PSC and post-transplant

10 things you need to know about PSC